After a seven year break from triathlons – I have been mainly running trail races like the Ragnar Trail Tahoe – I registered for the Santa Cruz Triathlon earlier this year.  The race was this morning, and I'm very happy with both the experience and my performance.  Today was at least the fifth time I've completed this tri, judging from the number of t-shirts I have.

I live a couple of miles from the starting line, so I rode my bike in the dark to Depot Park, got body marked, and found a good spot near the run exit.  For someone who hasn't done a multisport event in ages, I felt very calm while waiting in transition for the start.  The event was packed with extraordinarily fit athletes in singlets pushing high-tech bikes and wearing aerodynamic helmets.  But this is a local race, so we also had some more colorful characters around like this guy:

I had a feeling I could beat him at the swim.  He looked like a dog paddler.

I made my way down to Main Beach for the athlete's briefing at 7:45.  There were three to four foot breakers coming in that looked like they could knock you down pretty easily.  I didn't want to start my day being tumbled, so I decided that I was going to hang out near the back of the corral for the swim start and take a good look at the surf before jumping in.  When my swim wave started at 8:30 am, I was glad to be at the rear of the pack, because the first swimmers in the water hit one of those breakers and were stopped in their tracks.  The swim went a lot better than I expected.  I feel like there were many more safety folks out on surfboards which provided me with frequent sighting targets and helped keep me tracking more or less straight.  We had to deal with the breakers again at the exit on Cowell's, and I stopped to help a guy who had fallen and was having trouble getting back up to his feet.  Swim time was 35:22.

On Saturday, Heather asked me if I had a plan for the race.  I replied that my only plan was to not go too hard on the bike leg and and keep some energy back for the run.  I don't think I was entirely successful there.  I felt really good getting started on the bike course, which is flat for the first few miles and runs right up West Cliff Drive. That is practically my back yard, and I have ridden the entire course many times. I ended up averaging 18 mph for the first five miles and 17.7 mph overall for the 25 mile route according to my watch.  For comparison, I typically ride at about 15 mph.  On the 25 mile training ride I did on September 18th, I felt like I was pushing myself and ended up averaging 17.1 mph.  I guess I was just happy to be out on the road today.  Bike time was 1:26:31.

I had a fast transition from bike to run, even accounting for a quick conversation with another athlete.  The run course starts out flat.  After about 100 yards, it heads up a short hill by the Dream Inn and continues on to West Cliff.  I always have a hard time getting into running mode, and the start of the run is a mental challenge: my brain says, "go, legs, go!" and my legs say, "this isn't cycling! what the heck?"  When I got to the hill, I was determined to keep running.  I put my head down, shortened my stride, and plowed my way up.  I think the woman walking on the sidewalk next to me actually got to the top before me.  After about a half mile, I started feeling my abdominal muscles tighten up and my stomach getting queasy.  At the one mile mark, my watch called out my pace, and I thought I heard something like "10:30 per mile."  On a normal day, I run about 9 minute miles.  It was depressing to think that I was working so hard to keep moving and not throw up and the result was going to be an hour-plus run.  Of course, there isn't anything you can do but keep going, so I did.  Heather, her mom, and our friend Erika were out at mile 3 to cheer me on, and I got a big shot of energy from seeing them.  To tell the truth, part of the reason I kept running was because I didn't want them to see me walking or show how bad I was feeling at that point.  I continued up the road, past the turnaround, saw the cheering family again, and then entered the last two miles.  I started making deals with myself on each incremental bit of progress.  "Ok, the next part is slightly downhill, so if you run until you get to the low spot, you can walk up the short hill before you have to run again." "Next section is flat and your target is the lighthouse." "Now you're less than a mile from the finish, and it's mostly downhill."  This all must have worked, because after the one brief walk I didn't stop running until I had crossed the finish line at Cowell's Beach.  Total run time was 57:04, an average pace of 9:18.

So how did I do compared to the rest of the entrants?

More importantly, how did I feel about the race?  I'm quite happy with my performance this year.  I ended up roughly in the middle of the pack overall and within my age group.  In the past, I've placed about 2/3rds of the way down in both of those categories, so I definitely moved up a bit this year.  My overall time was a personal best for this race (2012: 3:16:58; 2013: 3:21:26; 2014: 3:36:51).  All afternoon, I've felt tired and hungry, which to me is an indication that I put in a good amount of effort.  I'm really pleased with the personal best as well.  Is this the start of another series of triathlons?  Maybe... 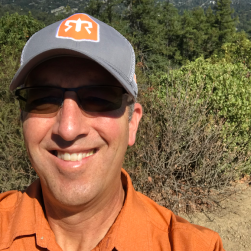